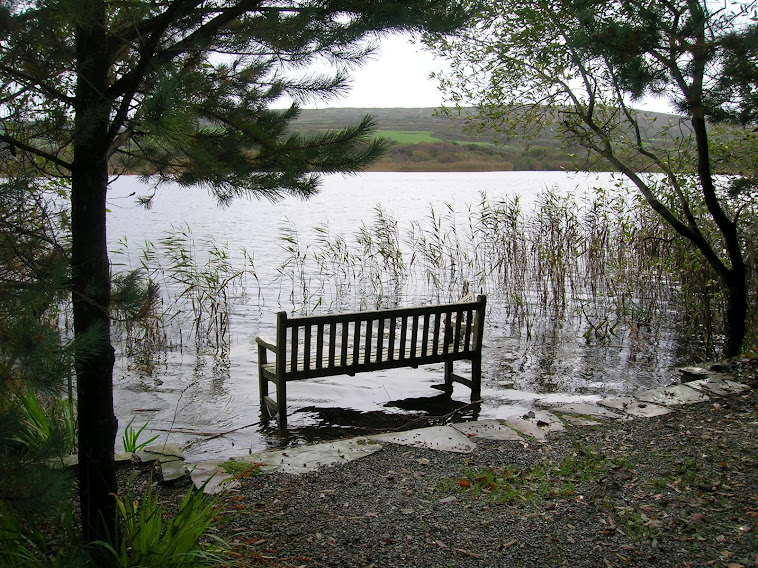 
The wonderful thing about this song is not how vicious and heartfelt the words are, nor how compelling that is in itself.  Nor is it the way those words are set against a friendly but ordinary melody.   It's something to do with the hopelessness of a relationship gone utterly to the bad - unfolding and falling to bits before your very eyes.

As I hear it, the song is about how one artist responds, with dislike and arrogance, to the concealed jealousy of another.  That is to say, it is about the unavoidable, but hurtful and diminishing, ranking of creations, and especially the disputatiousness and rancour rendered by that very act.

What a low point to begin a new series of posts.  And yet, something has got my juices flowing once again.  Venom stimulates I suppose. 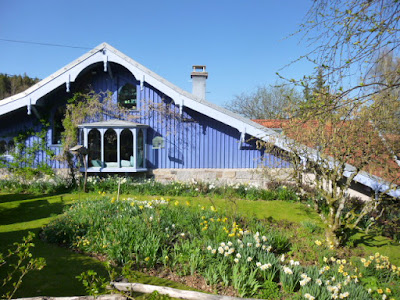 Let's start with a visit to Le Jardin de Berchigranges in the Vosges.  We slipped it in on our way down to Mondovi', driving -  as we had a lot to bring.  I have been wanting to visit since I read Noel Kingsbury's piece about it being the most beautiful garden in France, or Europe, or the world, something big anyway.  So I went, primed with something alert in me- something like suspicion: maybe jealousy,  maybe contrariness?

Well it's lovely.  And special.  Fairytale prettiness made palatable by wit and sophistication. On a blazingly sunny early April Sunday afternoon there was a full car park and a lot of activity in this distant mountainous outpost.  Motor bikes roared round the curve of the road which embraces the garden and yet once you were inside the row faded away and it felt like a peaceful hub of busy enjoyment.

To add to the pleasure there was a daffodil festival in a nearby town and everyone there was out picking the flowers and bunching them up to sell to each other, despite being mired in the traffic.  The little wild daffodils were everywhere, in all the damp meadows. 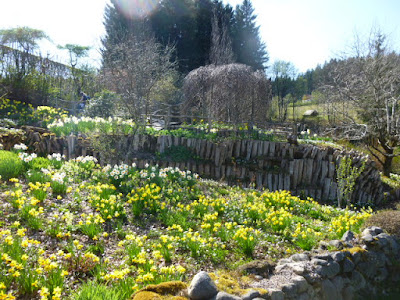 The garden was following the mood of the moment and running a daffodil election.  Each variety, and there were hundreds, was displayed singly, on tables in the centre of the garden and visitors were able to vote for their three favourites, ranking them in order.

I became absurdly over-involved, agonising over the twist of a petal, the length and frilliness of a trumpet, elegant under-statement versus sumptuousness.  It all seemed to really matter, for about quarter of an hour.  Justice to the daffodil seemed to require full attention, wise perception and rigorous judgement.

I suppose that's the benefit of ranking things - that it makes you look hard at them and think about them.  But it's like thinking it's reasonable to have a favourite colour - ultimately a childish activity. It's something we learn to lose interest in, preferring eventually to embrace complexity and difference.  At least that's what I like to think, until I find myself caught in the wheels of the same old disorder, exclaiming at a judgement disagreed with or vying with others for my own preferences. Surely we're old enough now to compare and contrast without having to put things into orders? Finally I understand about comparisons being odious - it's taken me this long to really hear that phrase. 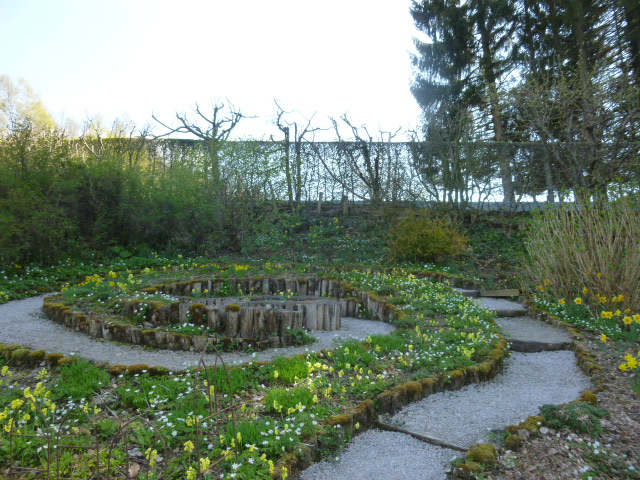 Anyway, Berchigranges.  It's full of surprises and hangs together really well.  Partly through being all arranged together in rising tiers on an ampitheatre-like slope, partly through having the same level of intensity thoughout.  By intensity I mean, a smallish scale and high, absurdly high, amounts of care and attention.   It could be fussy, but it's not, it's just intense. 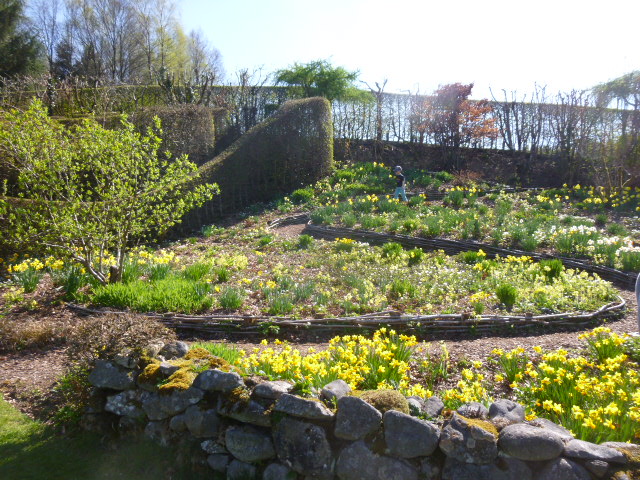 The hedging and plant-sculpting is exquisitely trimmed and maintained.  Like sheared lace at this time of the year before the leaves emerge on the hornbeam.  Especially the boundary hedge, which you can see above.  It must be fairly new as the trunks and main branches are slender and lacy too - just one of many bewildering achievements - do they keep replanting it to achieve that very effect? 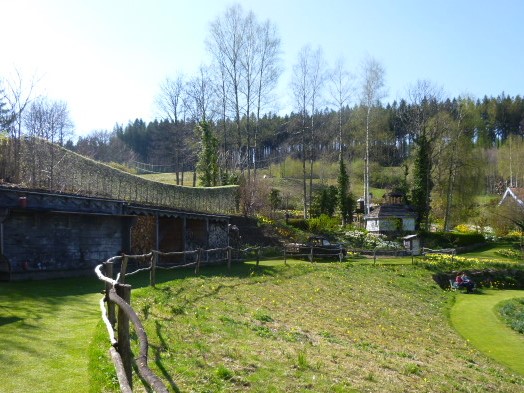 Most shapes in the garden are curvy - whirling and interlocking curves on the ground, larger hanging curves, again made of hedging, some coloured.  The drapery of an upside down arc of palest mint green sorbus gave me a shock, it was so clever and so original. Water flows through the garden, grass paths are luminous and scissor-edged - their curves unnaturally sharply-defined and the beds full to the brim with promising plantings. 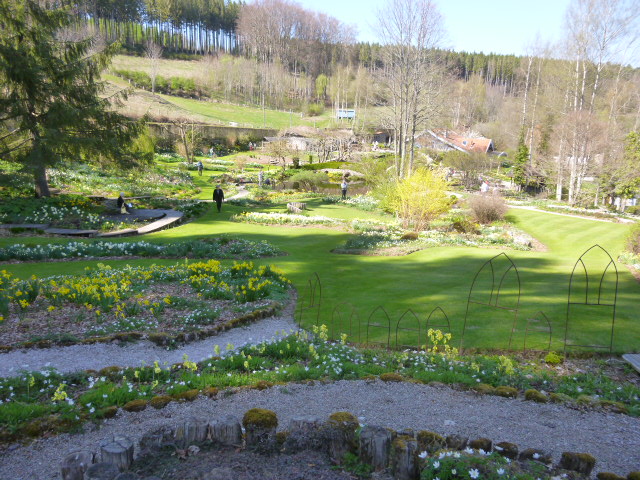 In these poor photographs we see huge numbers of daffodils but masses of perennials were also emerging, including some terrifyingly invasive types - variegated petasites and knotweed, as well as a fancy equisetum.  But nothing was out of control or escaping beyond its boundaries.  There are hardly any shrubs to invade the middle height  - edging and containment are a significant theme 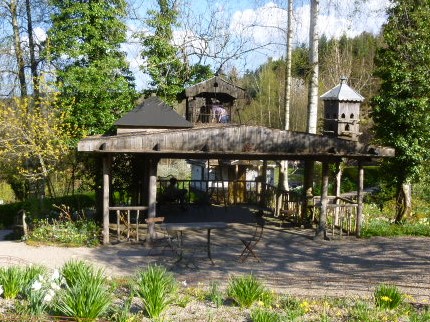 As ever, nothing is truly natural in a garden.  This one is as if every Alpine, gingerbread cottagey, backswoodsy element were maximised, brushed up and made over.  The wooden constructions, which serve every possible garden purpose, amaze with their prettiness and ingenuity. A large body of completely clear water reflects the sky but it is narrow and, set high in the garden,  not always in view.

I felt there was something strange about the atmosphere which might have been something to do with the uniform scattered intensity and the lack of dominant structures.  A kind of calm came over me, unexpected amongst all the detail.  It was to do with absorption in the closeness and complexity rather than a strong sense of push or pull, from one large feature to another.

It's a garden that plays with your sense of scale.  I was mesmerised and confused, but also quietened - a strange combination. 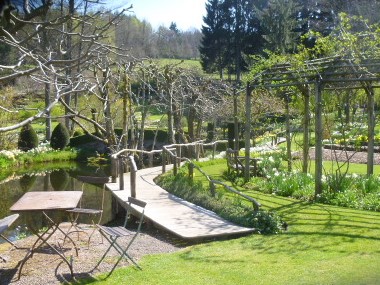 Odd how restful the completed work of others can be.  This is a garden where the minutes, the months, the years have all been put to their maximum use  The owners must be driven by a perfectionist madness of creativity.  One imagines them whittling, cutting and shaping deep into the wintry nights.

These are the things that are interesting a about a garden - what the makers have chosen to concentrate their efforts on, what they have felt worthwhile - that is the story the garden has to tell and just like any other story you want it to be something you have not heard quite like this before. Ideally, you want it told with wit, grace and clarity.  A little ambiguity doesn't go amiss but it needs to hang together and make sense and Berchigranges succeeds on all those levels.

This garden reflects the owners' interests and their beliefs about what is beautiful and satisfying to see, but it has an added dimension - that of being a garden ready to receive the public, children and all, ready to entertain and engage, a show garden, singing and dancing, new features at every turn. It's quite clear that it demands everything the owners have to give - all their time, their energy, the very sap in their veins.  We can see all it has cost written in the land. 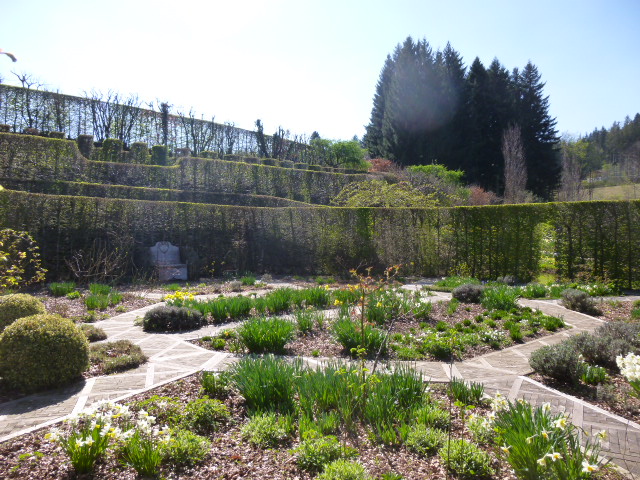 So we've chosen our three best daffodils, we've viewed a delightful, unusual garden, and we've had a chat with one of the makers, Monique, who enquired how I had heard about it,  When I mentioned Kingsbury's name, she looked rueful and gave me the impression that she was a bit worried that I might have come with excessive expectations. This sense of wobbly anxiety is the curse of scoring highly in ratings and brings us back to the song,

And where can the listener stand in this sad and tortured tale? Reluctant sympathy for the dishonest friend, whose misery and loss of self-confidence can be deduced.  Reluctant agreement with the unkind protagonist, who offers no way forward.  The final, and famous couplet, where the tables are turned, and turned again, floors us all.  The offer to stand in another's shoes is usually an invitation to understand and sympathise, but in this case the protagonist uses the expression to show exactly how remote understanding and sympathy are - for, stood in those shoes "you would know what a drag it is to see you".  How clever to fool the listener, even for a second, into thinking something different might result.  We too jump back, slightly scorched.

Well, it's an old sad story, this one of competitive wins and losses.  And it's not one that can disappear.  I like the song, because it tells a truth and it tells it well. The success of one person should not require the failure of others, but it might, and then the field is open to damage and rancour.

I was surprised at how strongly that simple, perhaps slightly off the cuff judgement of Mr Kingsbury affected my visit to Berchigranges.  In the past the knowledge that, say a Denmans or a Ruston Old Vicarage rank highly in the world of gardens to visit has not seemed to matter particularly - in this case, something slightly different happened, which I found it hard to cast off.  Perhaps it was the words "the most beautiful" lying there like a gauntlet.  One sets out almost determined to prove that that isn't the case.

Ridiculous though, to want gardening to be a bed of roses.  As Dylan shows us, creativity cannot help secreting a little toxicity sometimes - the venom of a distorted longing.

If you would like to hear a song I refer to, I commend you to dylanradio.com where a huge pool of songs awaits the anxious listener. Many versions are included and the lyrics are quickly accessible. I will usually try to specify the version I'm thinking about - often the least obscure.

Click the flash player to start listening, then go to Home, then to browse songs. Follow the obvious instructions and you will find your request is granted fairly quickly.